Between Rounds: Review and Prep 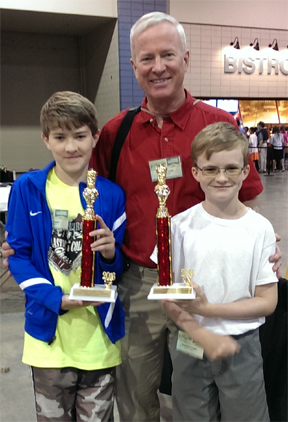 Each year, Championship Chess® coaches support many tournaments by being onsite to review games just played and to prepare players for their next round. Many of the students are beginners who don’t write their moves. Often, by sitting with the players immediately after the round we can look at the first 5–10 moves of their game and, usually, we can see 3 or more instances where they could have made better moves.

Frequently, we see players rated all up to 1400 who have made the same moves for a long time thinking they are making the best moves ⸺ but they aren’t. Many chess coaches say, if you want to get better play more chess. But, what strong players do is to review their games, and to review them during a tournament is best.

Getting prepared for the next round at a tournament can improve tournament results. I have seen how opening preparation helps focus a player before a game and what many players report back after the round is that what we studied was exactly how the game started. The longer the time controls the more time between rounds for lower-rated players, who usually play more quickly, to prepare. Since many lower-rated players start with part of the Italian game, a coach can prepare several players with both white and black for each round.

At the SuperNationals VI in Nashville this year, we had a hard-working group of kids in our Players’ Room. Joseph Cagle, a 7th grader from Virginia, is an excellent example of how review and prep can make a difference during a tournament.

Joseph played in his first USCF Rated tournament in January 2013, and started with a 441 rating. By February, he had gained 200 points. One year later, he was rated 862 after having played in only 24 tournament games. The following year, January 2015, his rating had jumped to 1103; 6 months later it had moved up to1200. But, until the 2017 SuperNationals, he had never gotten over 1260, staying at this level for as long as 22 months.

Working with Championship Chess® coaches in the Players’ Room helped Joseph review each game. It also helped him prepare and focus. He was not just successful at his level of U1400, but he successfully played up in the U1600 Section, winning 5 games and only losing 2 and gaining 214 points. His record tied him for 37th place out of 484 players. That was quite a move up from his initial ranking of 349th in the section. It was fun to see his move-by-move analysis for each game and the game review and prep were great. Joseph was playing real chess.

Joseph’s success is just one example of how game prep and review help students at tournaments. It’s important for players to focus and prepare between games so that tournament play really does help players grow.