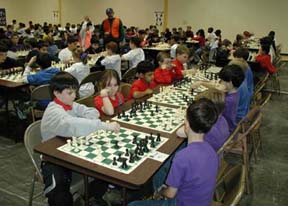 Don’t waste your time and money on tournaments that aren’t a good fit. Many years ago, I took my 8-year-old son, Jay, to a large national tournament, the U.S. Open. Each round he was paired either up or down with players over 350 points away from him. That made his games with higher rated players too stressful and games with lower rated players too boring. It was a 6-round tournament over 3 days. We came away knowing we had wasted an entire weekend, quite a bit of money and Jay hadn’t gained skills or improved his chess knowledge.

Tournaments are an opportunity for players to test and enhance their skills. However, that would depend on how well a tournament is organized to work toward a young player’s advantage. For those players rated under 1200 by the U.S. Chess Federation, it is important that they play in tournaments where they have the opportunity to gain 50 or more rating points. For the unrated player, it’s best to play in a tournament that has an unrated section, until you’ve achieved at least one plus score.

Good Scholastic Tournaments offer sections based on age/grade level and/or rating. A spread of no more than 2-3 grades is particularly important for the younger player. A rating spread of 300-400 points is ideal in rated sections. For example, sections may include Under 300, Under 700, and Under 1000. These sections may also be divided by grades. So, a National Tournament like the Elementary Championships would have three K-5 sections divided by Rating: Under 800, Under 1200 and Championship. A choice of several tournament sections provides a greater opportunity for winning.  If you lose the first two rounds, don’t quit early. The later rounds in a tournament are usually when players are more equally matched and you’ll have a better chance for winning.

Players have an even better opportunity for learning and improving chess skills, if there is time between rounds where coaching is offered. This is more than “skittles” time; it’s time for game review and prep. Then, even if players don’t gain at least 50 points or come away with a plus score, they have at least increased their chess skills and will be better prepared for their next tournament.

Our 7th Annual K-12 Spring Fling, which takes place Saturday, June 16th, is a good example of a tournament that offers an excellent opportunity for all K-12 students.  For even higher rated players, our Premier section offers $150 cash winnings to be used for further chess play. Check our Tournaments online to find out about Championship Chess tournaments and tournament play.